Buckhaven Veterinary Clinic is founded upon the simple premise that our clients want to be treated in the same fashion we would wish to be treated. We strive to present a professional image, remain friendly and accessible, and create an environment befitting our clientele. Our facility is designed to be open, bright, and comfortable. We showcase artwork and craftsmanship by local artisans, and we offer in-clinic WiFi and laptop usage for our clients and their children.

We understand the degree of trust our clients place in us and we are committed to meeting the level of service and care this necessitates. Communication is at the core of our ability to meet our goal and we endeavor to properly explain our findings and recommendations while working through the decision making process with our clients.

Our logo was developed as a variation of the Stag of St. Hubert (Hubertus/Eustace.) As legend has it, St. Hubert's wife died at a young age and during childbirth in Belgium. Becoming disenchanted with religion, Hubert withdrew from it, and threw himself into hunting.

On a Good Friday morning, when the faithful were crowding the churches, Hubert headed out to hunt and came in pursuit of a magnificent stag. As he drew back his bow, the animal turned to face Hubert at which point he was astounded to see a crucifix perched between its antlers.

At this moment he heard a voice saying: "Hubert, unless thou turnest to the Lord, and leadest a holy life, thou shalt quickly go down into hell". Hubert went on to become a Bishop and later a Saint, and from this legend comes the Stag of St. Hubert which has also been somewhat unceremoniously borrowed by Jagermeister (German for Master of the Hunt) Liqueur. 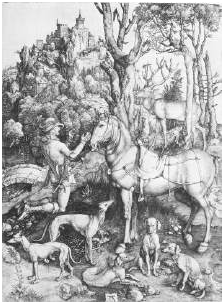 Does your child want to
be a Vet? Learn more.>>